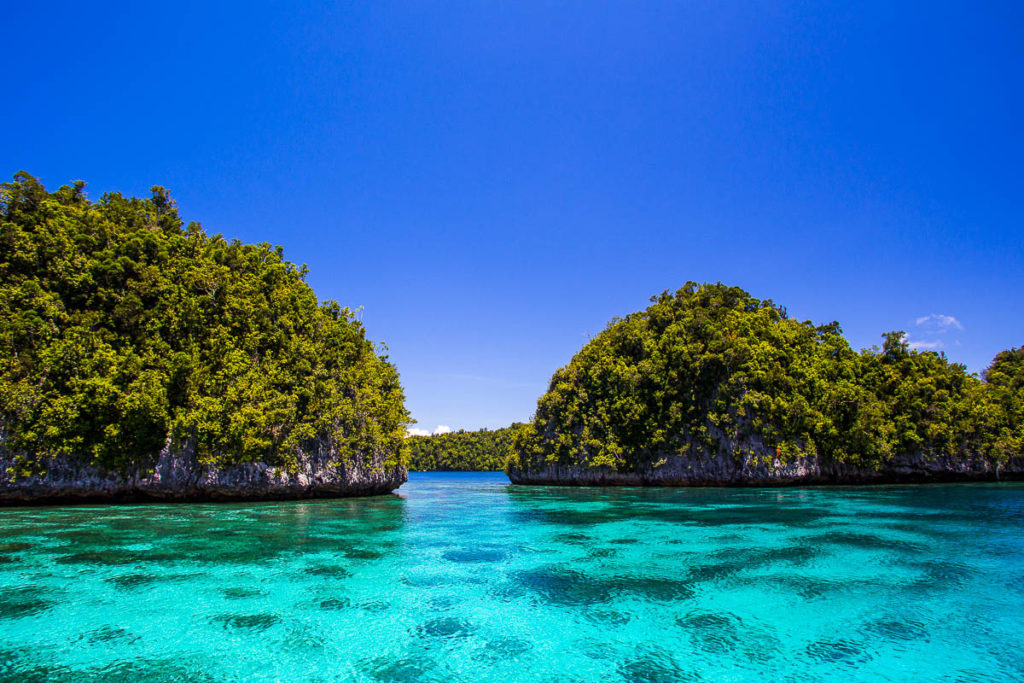 Although the Philippines is an archipelago, you can drive through the country. Pretty curious, isn’t it? The road across the country is called Pan-Philippine Highway (AH26), also known as Maharlika Highway.

It takes only two relatively short ferry rides, and crossing one long bridge, to drive from Luzon to Mindanao via the islands of Samar and Leyte. All in all the drive from Manila to Surigao, Mindanao, is 1000 kilometers long.

Non-stop it would take you 24 hours, but as there are amazing sights on the way, you better book as much time as you have. This is a driving adventure of epic proportions, and definitely the best road trip in the Philippines.

The best thing about driving the Marhalika Highway is that you will get to beautiful, remote places that you probably not otherwise get to. You will find unexplored paradise islands, whale shark watching and even a secret surfers’ haven.

As they say, “It’s more fun in the Pan-Philippine Highway!”

Where does the Pan-Philippine Highway start and end?

The entire length of the Pan-Philippine Highway is even much longer than the Manila–Surigao strip. Officially the highway AH26 starts from the northern tip of Luzon and ends in Zamboanga, the south-western corner of Mindanao. That’s 3500 kilometers in all. But very few would drive the whole way.

That’s why we cover here the most interesting section of the Pan-Philippine highway from Manila to Surigao.

First stop from Manila is the Taal Volcano in Tagaytay, about 2-hour drive away. Taal is probably the most famous volcano of the whole country. It’s also the most active. As recently as in January 2020 Taal sent menacing ash clouds high into the air.

When the volcano is calm, it’s a great spot for sightseeing. And very peculiar too. Taal is like a volcanic version of the Russian Matryoshka doll. The volcano consists of a crater with a lake. Inside that lake is crater island with another lake inside. And there is one more island in the middle of that lake. Sounds confusing, right? Better go and see the whole thing with your own eyes.

Soon after Taal the road passes another volcano, Bundok Banahaw, which many Filipinos consider a sacred mountain. If you have time, you can climb up all the way to its 2,170 meters high summit. That would take you on average 5 or 9 hours, depending on the route.

Drive Through the Quezon Protected Landscape

From Bundok Banahaw you arrive to the lush mountains of the Quezon province, part of the Sierra Madre mountain range. Here you can choose between the slightly narrower but more scenic Old Zigzag Road or the newer Diversion Road, which zigzags its fair bit too.

From here on mountain and coastal landscapes alternate. You can enjoy beautiful blue color from the car windows but there are still not any notably beach spots.

To reach a beach paradise, you have to drive all the way to Daet, Camarines Norte, where you can get a boat to the Calagua Island. The island is famous for its beach Mahabang Buhangin. The beach is wide and white and the sea turquoise.

There are not real resorts to stay overnight, but you can camp on the beach if you have a tent with you. Or you can rent a tent or a cabana on the island.

Caramoan – the Next El Nido

Two hours from Daet you arrive to Naga. From here you absolutely have to do a 3-hour long detour to the remote Caramoan Peninsula. We promise you, it’s worth the effort! Caramoan Peninsula would be the next great destination, if it wasn’t so remote.

The scenery is like in El Nido, Palawan, but without the crowds. Tourism in Caramoan is still in its infancy even if it has been used as the location for the popular reality TV show Survivor.

As for now there are still only a handful of places to stay, all located in the Paniman village from where you can take boat trips to the small limestone islands.

From Caramoan it’s almost 5-hour drive to Legazpi City, which sits on the foothills of Mount Mayon.

Mount Mayon is a perfectly cone-shaped volcano, like Philippine version of the Mt Fuji in Japan. The most famous view to the volcano opens up from the Cagsawa ruins of and old bell tower.

Stay overnight in Legazpi or drive to Donsol, one and half hours, if it is the whale shark season from November to June.

Donsol was the first spot in the Philippines that become famous for its whale sharks or butanding. The whale shark watching is organized with the help of World Wildlife Fund (WWF) so it’s done in a very ecologic way.

Sightings of the huge but harmless sharks is not guaranteed, so stay at least for a night or two to maximize your chances. The whale sharks are best spotted in early mornings.

Or you can skip Donsol altogether as you will find even a better place so swim with the gentle giants in Southern Leyte during this road trip.

Two-and-a-half-hour drive from Donsol you will finally arrive at the Port of Matnog, where the ferries to Samar depart. Bye-bye Luzon!

In Samar, you have arrived at the wild country, to the untamed wild east of the Philippines. Mountainous, jungle-covered Samar is the third largest island in the Philippines yet very little visited. It is rugged and majestic.

Third of the whole island is protected as a national park, making it the biggest primary forest area in the Philippines. This is one of the prime natural habitats of the Philippine eagle, the largest eagle in the world by wingspan, and diminutive Philippine tarsier. Few people come to see them here, though.

The highway follows the east coast of the island. There are not much sights or traffic on the way. Play Born to be Fee on the stereos and just enjoy the beautiful seaside scenery.

It’s about 5-hour drive to the San Juanico Bridge, that connects Samar to Leyte.

If you want to cut the drive with a little sightseeing, you can stop by the beautiful Tarangban Falls or Lulugayan Falls.

Close to the San Juanico Bridge is the only famous attraction in Samar, the Sohoton Caves and Natural Bridge Park, and even that is quite unknown outside Samar. The limestone caves can be visited on a boat or kayaking trip along the river.

If you are not shy of another long detour (this time 150 kilometers each way), you can drive from the Sohoton Caves and Natural Bridge Park to Calicoan Island, which is connected to Samar by a bridge.

The island’s ABCD Beach which is slowly emerging as a surfing destination. Great waves and relaxed, low-key surfer vibe.

The 2-kilometer long San Juanico Bridge is the longest bridge in the Philippines and connects Samar to Leyte, another big island. The bridge has a lane for walkers too, so you can park your car and have a short walk along for some photo opportunities.

Almost on the other site of the bridge, is Tacloban, the biggest city in Leyte.

Tacloban – on the Footsteps of Imelda Marcos

Leyte’s biggest city is infamous for the havoc of Typhoon Haiyan that hit the city on November 2013. A 4-meter high storm surge run over the city and killed over 6000 inhabitants. In January 2015 Pope Francis visited the city to hold a mass with the survivors.

Since then Tacloban has luckily recovered from the destruction. There’s not that much to see in the city itself, except the colonial style Santo Nino Shrine and Heritage Museum, established by the Marcos family. Late president and dictator Ferdinand Marcos built the mansion for his wife Imelda Marcos who spent her youth in Tacloban. Inside you will see grand ballroom, antiques and fancy furniture.

A few kilometers south of Tacloban is the MacArthur Landing Memorial Park, arguable the most famous landmark in Leyte. The statue commemorates the moment when General Douglas MacArthur made a landing in Leyte Gulf on 20 October 1944 and started the campaign to liberate the Philippines from Japanese occupation.

What followed was The Battle of Leyte Gulf (October 23–26, 1944), one of the largest naval battles in the history.  Japanese naval might was destroyed in the battle, so the memorial symbolizes the beginning of the end of Word War II.

From the Memorial Park the Pan-Philippine Highway follows the east coast of Leyte to to Pintuayn, a 3-hour drive away. This is the best place in the Philippines to swim with whale sharks. During the whale shark season from November to May you are pretty much guaranteed to see whale sharks here, and best of all, without the crowds and hassle of more famous locations like Donsol or Oslob. Spend at least one night here!

From Pintuyan it’s just a stone’s throw to San Ricardo Port from where you can catch a ferry to Surigao, Mindanao.

Finally, you have arrived at Mindanao! The adventure doesn’t stop here, though. In Surigao you can swim with dolphins and explore the secret paradise islands of Dinagat. And take a boat to the famous Siargao Island.

If you are still hungry for more driving, you can continue the Pan-Philippine Highway from Surigao through Mindanao to Davao and all the way up to Zamboanga. But that is another story.

In Surigao you should relax at least a few days in our beautiful Surigao Dream Resort.

How to Get Back from Mindanao?

Your next question would probably be, now will you get back to Manila from Mindanao with your vehicle? No worries, you won’t need to drive all the way back the same way.

Our recommendation is, that instead of following the AH26 in Leyte, on the return journey you drive up the western coast of Leyte and explore the beautiful but little visited paradise islands there.

From Leyte’s northern tip you can by-pass Samar altogether by catching a ferry to the intriguing Masbate Island on your way back to Luzon.

An alternative route would be to catch a ferry from Mindanao’s Bayan ng Balingoan to Camiguin and continue from there via Bohol to Cebu, from where it’s a 22 hours ferry trip to Manila.

Tips for Driving the Pan-Philippine Highway

Bear in mind that despite the name, size-wise this is not a highway at all. The road has mostly only one lane on each side and even they can get quite narrow in places. Villages on the way will slow you down.

The drive is most rewarding when taken on a motorbike but driving by car is fun too. Just remember to have a lot of time at your hand and not to worry about getting to your destination fast. On road trips the journey is more important than the destination!

Welcome to Surigao Dream, our little beach resort in The Philippines. We will make your stay memorable and show you the best experiences Philippines has to offer: amazing island hopping, diving, waterfalls, caves, and snorkeling with whale sharks and dolphins.

Sorry for the inconvenience, but our area is still out of mobile connection after super typhoon Odette. Best way to contact us is through Facebook Messenger or email.

5 Best Places to Snorkel in the Philippines

What is the best place to snorkel in the Philippines?...

Best Things to Do in Mindanao

For most travelers the first touch to Mindanao is Siargao,...

Although the Philippines is an archipelago, you can drive through...

Camiguin is known as the Island of Volcanoes, or even...