The Island of Volcanoes 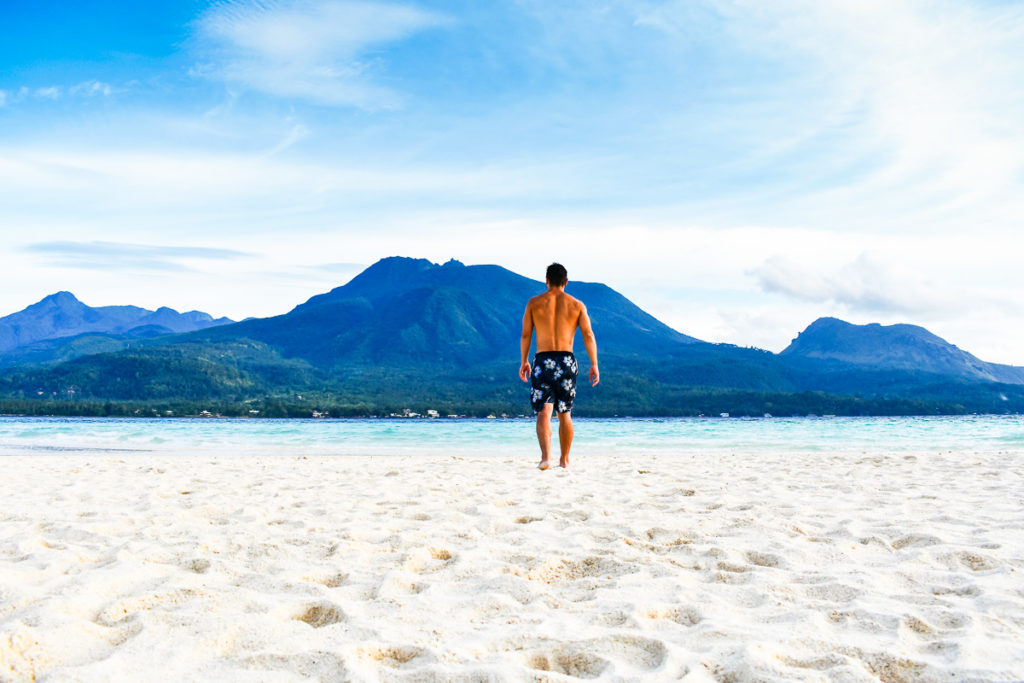 Camiguin is known as the Island of Volcanoes, or even more poetically, Island Born of Fire. This small, round shaped island has as many as four volcanoes. Must be some kind of a world record for such a small place, we believe. Has anybody from Camiguin contacted Guinness Book of World Records, yet?

You can climb up some of the volcanoes, but most people just settle to the more relaxing way of enjoying the island’s volcanic origins by bathing on its hot water springs.

You will enjoy lush and green mountainous interiors, plunge to the refreshing pools under waterfalls and do day-trips to even smaller islands with shiny white sand and turquoise water.

It’s not only the volcanoes that make this island so intriguing. Soon after arriving to Camiguin you might just start getting the feeling, that there’s something special in this place. The island seems somewhat more organized and tidier than most other little places in the Philippines. Villages are blooming with flowers, and you won’t find much trash on sight. The overall feeling is very neat and even salubrious.

There is a reason for that. Already long ago, during the colonial times, the Spanish clergy took a liking on the place and priests settled here in large numbers. To have something to do, they established schools which exist until today. As a result, the standard of education is higher on the island than almost any other place of similar size in the Philippines.

Despite the island’s rather diminutive size, there are surprisingly many things to see and do to keep you occupied for several days.

Here are the best things to do in Camiguin.

The White Island – the Best Beach in Camiguin

This beautiful little sandbar island is by far the most famous beach in Camiguin. Here you find perfect white sand and turquoise water whereas the beaches in the main island are mostly formed of volcanic black sand, thanks to the volcanoes.

Here you will also get the best look at the volcanoes of Camiguin. Mount Hibok-Hibok and smaller Mount Vulcan rise spectacularly in front of your eyes.

Boats to White Island leave from a quay just opposite the island in the village of Yumbing. Just next to the quay is Paras Beach Resort, one of the swankier places to stay in the island.

This is another beautiful day-trip destination from Camiguin. The white sand island is located a few kilometers off the eastern side of Camiguin and surrounded by protected coral reefs. A great place to see turtles, they are really abundant here. Remember to take your snorkeling gear with you! Or book a diving trip from one of the island’s dive shops.

Boats to Mantigue Island leave close to the village of San Roque.

The Sunken Cemetery – The Most Famous Diving Site in Camiguin

The most famous dive site in the island is, however, The Sunken Cemetery. The name sound pretty exciting, doesn’t it?

You won’t see any graves underwater, tough. Just a huge white cross above the water reminds about the cemetery that was washed to the sea after the next-door Mt. Vulcan erupted in 1871. The eruption wiped away the island’s former capital Catarman and its cemetery to the sea.

Contrary to what the name might suggest, The Sunken Cemetary is pretty ordinary dive site as the corals have covered the remains of the tombs. No zombies or other more Thriller-like creatures in sight.

This underwater site is rather shallow so you can also explore it easily by snorkeling.

Just a short drive south of the Sunken Cemetery, on the main circumferential road, lie the ruins of an old Spanish church. Not exactly a world class sight, but a worth a short visit, nonetheless. The ruins are another remainder of the devastating eruption of the Mount Vulcan in the 1871.

Ardent Hot Springs is a popular place to soak in hot, volcanic waters. The location is pretty central on the foothills of Hibok-Hibok volcano, just a short drive from the traveler areas of Yumbing and Agoho.

Camiguin’s highest volcano is Mt. Timpoong, which rises 1,614 meters above the sea level right in the middle of the island.

However, the most famous volcano is Mt. Hibok-Hibok (1250 meters) which last erupted in 1952. It is also the only one that is still considered active.

You can hike all the way up to Hibok-Hibok and its crater. Don’t expect to meet otherworldly moonscape though. The crater has been taken over by green foliage and a small lake. Pretty it is, still. From the top you will see the White Island and all the way to Bohol to the north and Siquijor to the west.

Hiking starts usually at the Ardent Hot Spings and it takes 3 to 5 hours to reach the summit. It’s best done with a guide as hiking the volcano requires a permit from the Department of Environment in Mambajao.

The forests around Hibok-Hibok and Timpoong are a protected landscape that has been declared an ASEAN Heritage Park. The forest is the last refuge for the island’s endemic species like Camiguin hanging parrot, Camiguin hawk-owl, and Camiguin forest mouse. You read it right, this island even has its own endemic inhabitants!

Katibawasan is the highest and most popular waterfall in the island. The waters fall down impressive 76 meters to a pool where you can have a refreshing dip.

Tuasan Falls and the Road Across the Island

Not that long ago you had to literally drive around the island to get from one side to another, but nowadays you can also cut the drive short by driving across the island through a newish mountain road that snakes between the two main volcanoes.

This is a cool drive even just for the scenery, and you can stop halfway by the beautiful Tuasan Falls.

Refresh Yourself at the Santo Nino Cold Spring

Somewhat curiously Camiguin does not only have hot springs but cold springs as well. When driving around the island you can cool down in Santo Nino Cold Spring on the western part of the island between Sunken Cemetery and Sagay Village.

Another option for a cool dip is the Bura Soda Water Swimming Pool close-by.

In Sagay you will find some old and pretty heritage houses to admire and an old historical church, Holy Rosary Parish.

This is probably the quietest spot amongst the island’s waterfalls due to the distant location on the northern part of the island quite high up the majestic volcano Mt. Timpoong. Road to the waterfall starts from Sagay.

In the south-eastern corner of the island you find one more small and intriguing sight, the Giant Clams Sanctuary. For a small entrance fee, you can snorkel to the protected sanctuary which is dedicated to the endangered giant clams. You will see more than a hundred of them in neat rows.

Next to the sanctuary there are also small stretches of white sand beach.

Visit Mambajao the Capital of Camiguin

Camiguin’s capital is Mambajao on the north-eastern side of the island. This is also the main transport hub of the island as the airport and the ferry terminal to Bohol are on the opposing ends of the town.

Soak up the local atmosphere and have a look from outside the Borromeo Residence, a prime example of a traditional colonial style house of the Philippines. The house is just around the corner from the small Municipal Hall.

Culinary Camiguin is best known for its lanzones fruits, which grow here sweeter than anywhere else in the Philippines due to the rich, volcanic soil.

The fruits are celebrated every year in the third week of October during the Lanzones Festival. Expect colorful parades and a lot of fruits to indulge.

Camiguin’s main traveler hot spots are Agoho and Yumbing, which are located next to each other at the northern side of the island.

In Agoho you will find the widest black sand beach on the island and two of our favorite places to stay in Camiguin, the fancy Balai sa Baibai or more down-to-earth stylish SomeWhere Else Boutique Resort.

Main draw to Yumbing is its location just opposite The White Island.

How to Get to Camiguin

The island has a small airport, Camiguin Airport (CGM), which operates flights mainly to Cebu, but some flights to Manila too. Even having an airport in such a small mountainous island is quite a feat. The airport is next to the island’s capital Mambajao on the northern side of the island, a short ride to traveler villages Yumbing and Agoho.

You can get to Camiguin also with a ferry. Ferries to and from Bohol use the Balbagon Ferry Terminal.

On the north-eastern side of the island is Benoni Ferry Terminal, which operates the ferries in and out from Mindanao. These ferries cross the narrow channel to Balingoan Ferry Terminal from here you can continue your journey in Mindanao towards fascinating Surigao (5 hours by bus) and the famed Siargao Island (2 hours by boat from Surigao).

Pan-Philippine Highway – The Best Road Trip in the Philippines – surigaodream.com Log in to Reply

[…] alternative route would be to catch a ferry from Mindanao’s Bayan ng Balingoan to Camiguin and continue from there via Bohol to Cebu, from where it’s a 22 hours ferry trip to […]

Best Things to Do in Mindanao – surigaodream.com Log in to Reply

Welcome to Surigao Dream, our little beach resort in The Philippines. We will make your stay memorable and show you the best experiences Philippines has to offer: amazing island hopping, diving, waterfalls, caves, and snorkeling with whale sharks and dolphins.

Sorry for the inconvenience, but our area is still out of mobile connection after super typhoon Odette. Best way to contact us is through Facebook Messenger or email.

5 Best Places to Snorkel in the Philippines

What is the best place to snorkel in the Philippines?...

Best Things to Do in Mindanao

For most travelers the first touch to Mindanao is Siargao,...

Although the Philippines is an archipelago, you can drive through...

Camiguin is known as the Island of Volcanoes, or even...